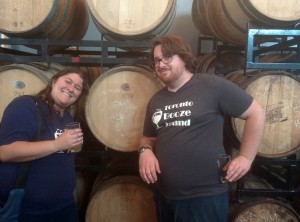 We love Indie Ale House and we also love their barrel room (which doubles as an event space.) The place has a great vibe and it helps that the two events we have gone to there have both been a huge amount of fun.

The first time we went there was for stout night. You can read our experience here.

The main header image of our website (right up there ^) was taken there. This time we were there for the Home Brew Tap Takeover and the barrels we took the photo at were still there! So of course we took another photo seen to the left.

The event itself was simple: 12 home brewers showed off their wares. It costs $10 for entry which included a free glass and two tickets. Tickets were worth $2 each, so minus that you only paid $6 entry. The glass itself made it even more of a value.

Each ticket got you a 5 ounce pour of a home brew concoction.

What I love about home brewers is that since they are making much smaller batches they are more willing to experiment with flavours. If the flavour doesn’t work they can just toss it. Something the large brewers can’t really do.

My favourite beer of the night was the Sasparilla. It was brewed by our good friend Doug Appeldo 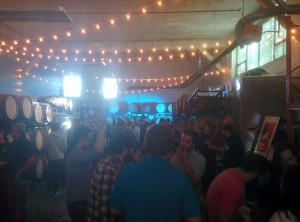 orn of School House Craft Beer.  We always recommend anything he makes.

During the night we had a chance to meet many of the home brewers who had beers available and it was wonderful to hear them talk so passionately about their product. With places like Rainhard and Muddy York coming from the home brew scene I can’t wait to see what these guys can create.

After the second hour everything became a bit of a blur but I know I had a great time and will most certainly be attending next year.