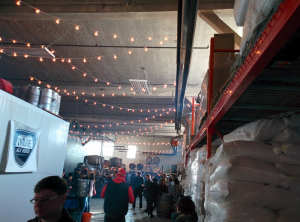 When old man winter comes knocking, it’s always best to be prepared with some strong black beer to keep him at bay. Which is why I always grab some nice high ABV stouts as soon as I see some snow on the ground.

The owners of Indie Ale House seem to have the same idea as they run an annual ‘Stout Night’ every December. What’s different this year is that they ran it out of their barrel warehouse on Geary ave. It’s tucked away and surrounded by trains, but certainly has some charm.

When we first arrived (right on time) we were greeted with a relatively short line and a large Indie Ale House banner. The line moved pretty quickly and things seemed pretty well organized. Inside they simply asked for our names and checked us off a list instead of having to scan our tickets.

The photo above is what it looked like as soon as you entered: a large amount of hops and barley to the right and endless amounts of barrels all around.

Your entry ticket got you two tickets and a very cute sampling glass seen right…. HERE! 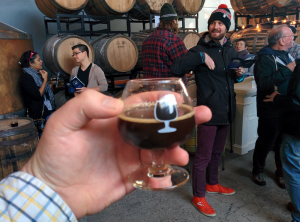 Isn’t that so cute? I couldn’t get over how cute it was. Though I did notice it looked somewhat familiar: 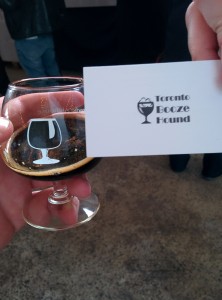 I’m going to assume it was just a coincidence.

Each drink ticket was $2 and got you a standard 4 ounce sample. This was more expensive than most beer events (the are generally $1 per sample) but most of the stouts were the more expensive variety and had much higher ABV’s than usual.

The food tickets on the other hand were a little over the top, being $4 each and many food items costing several tickets to get.

When we got the tickets we expected what we were used to with beer events: each brand would have a table to themselves to serve the beer from and promote. This event on the other hand had two bars and each bar had several different brands of beer to choose from.

This worked out quite well. The lines for beer were generally short and very fast moving. We were very rarely without beer in our (INSANELY cute) sampling cups.

Being in the Indie Ale House barrel warehouse it was fun to see how they label their barrels. We were hoping we would get a glimpse at what interesting barrel ages beers might be coming to Indie Ale House in the future. Sadly the only easily marked barrels were beers we already knew about and the odd joke. We did like the jokes… 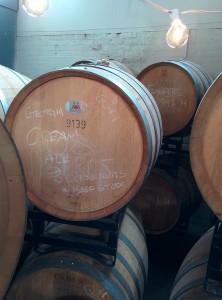 That IS a joke right? It has to be a joke. They had to be messing with us.

We also got a chance to meet our friends at The Brew Box Co and will be doing a write up on them sometime in the new year.

The beer itself was a great selection with favourites from Bellwoods, Amsterdam and more. I’m not going to go into each individual one but I must say I enjoyed basically every beer that touched my lips that night. It was awesome to see Nox Aeterna again from Black Oak.

In the end I must say I had a great time and can’t wait to go back next year. Now, how do I get this black beer stain out of my shirt?

One comment on “Stout Night by Indie Ale House, an Experience”