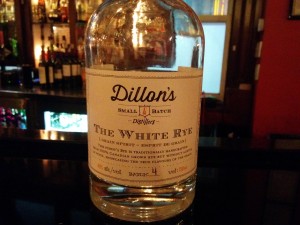 This weekend we had a wonderful time at a beer and cheese pairing event hosted by the always lovely Gladstone Hotel.

While there I noticed a unique bottle of Rye sitting on the shelf along with all the standard whiskies. It was completely clear with a very simple white label.

When I saw that it was a Dillon’s product I had to give it a try.

You see, I’ve heard of Dillon’s but had yet to try it and being the adventurous type I try basically everything I discover.

Dillon’s is a micro distillery based out of Beamsville, Ontario. They’ve only been distilling since 2012, meaning it’s still not possible for them to have a ‘true’ Canadian whisky. The rule is that a Canadian whiskey must be aged for at least 3 years. But this rye is about Canadian as you can get without following those rules.

This ‘distillation’ is made with 100% rye. 10% of which is malted, the rest being unmalted. 100% of the grain is from Canada and since they don’t age it, you’re tasting the grain alone without any barrel notes to hide it. Some say this is a purists drink, other’s say it is a way to get around aging.

I should note that the first two tasting notes you’ll see below are incredibly misleading.

Taste: Surprisingly sweet and smooth. More cinnamon, vanilla, chocolate and a bit of banana. It has a nice spiciness that comes from the rye.

Aftertaste: Almost none to speak of. A bit of sweetness.