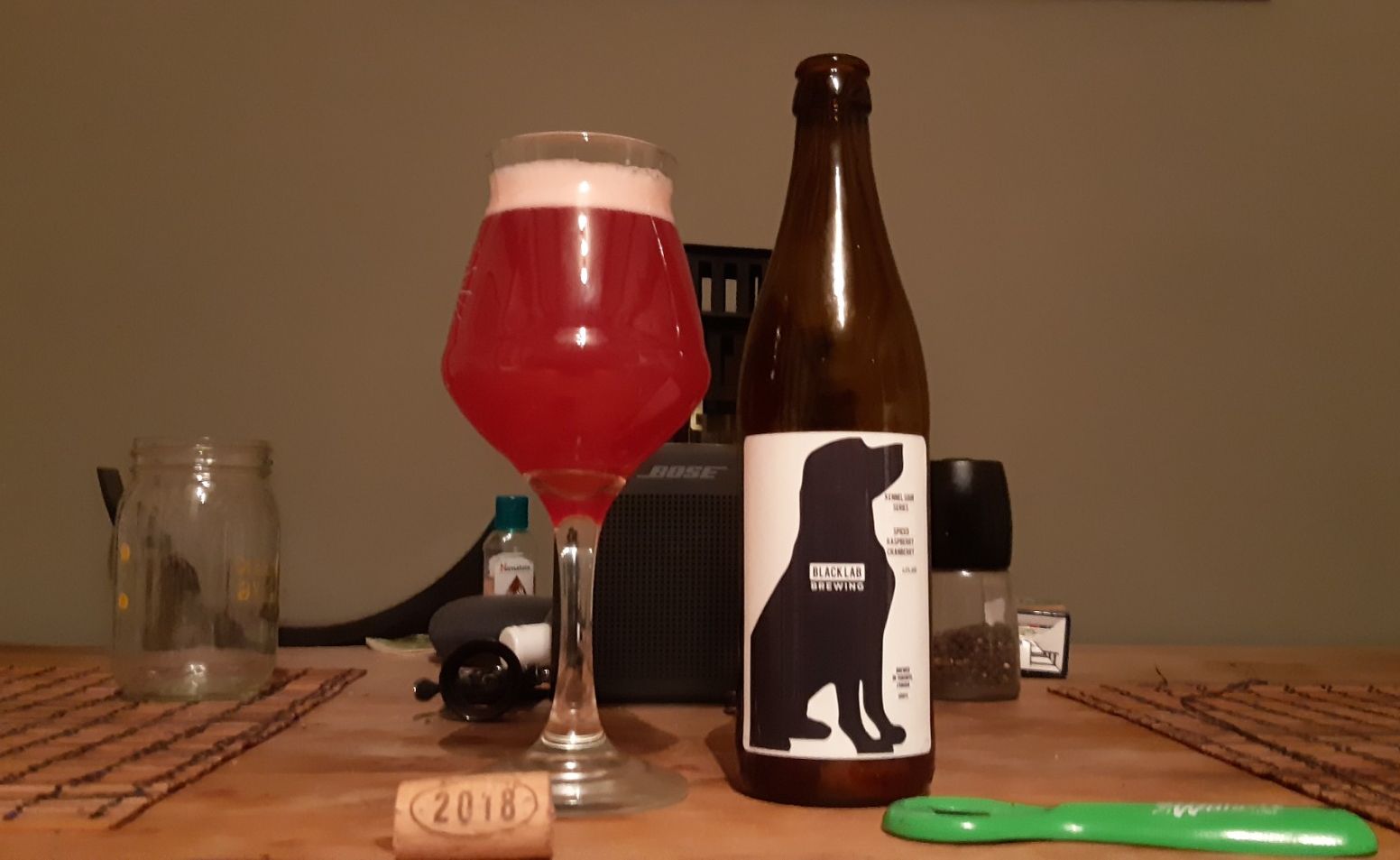 You didn’t think we’d forget about our favourite series, the #8BeersOfChanukah, did you? During these magical eight crazy nights, I won’t let Kole anywhere near my stash of beer or post any updates. Now I know we’ve been very quiet the last few months – I honestly don’t really drink much these days, which has a bit of a negative impact on us generating content, but a positive impact on my weight, overall health, and wallet. But this is an important tradition, so I’m back and better than ever.

Our first beer for this year’s series is a decidedly unkosher beer as it contains fruit additives. I picked up a couple of bottles of Black Lab Brewing‘s Spiced Raspberry Cranberry Kennel Sour Series on a recent jaunt to Leslieville after we checked out Bohemian Rhapsody in theatres. I pretty much only go to the movies on Christmas, so I thought it was a fitting beer to include in our 8 Beers of Chanukah series, since it was a rare occasion for me. In hindsight, I could have at least chosen a beer that met kosher dietary laws – the addition of fruit, syrups or spices to a beer makes it inherently not kosher unless certified. I’m not a stickler for dietary rules, so I’m going to let it slide. At 4% ABV, I don’t feel too guilty treating myself to this brew on my low alcohol diet.

Black Lab Brewing is an inviting space in Leslieville, located at 818 Eastern Avenue. Inviting, as long as you don’t mind a few canines sniffing around the brewery, looking for lovies. The Booze Hounds are quite pro-doggo, as we share our home with a 90-pound rescued black standard poodle that is terrified of all other dogs. We left him at home during our visit. It was just as well – he would have been very interested in “helping” with the oyster pop-up happening courtesy of Island Oysters. Wait – did I just mention shellfish in a Chanukah themed post? Oy vey. Don’t tell our Rabbi readers out there – we know we have at least one.

Dietary rules aside, a sour beer is a great choice for your Chanukah parties. The tartness and puckering acidity of a well-balanced sour beer pairs wonderfully with the richness found in shmaltz-heavy dishes popular around the holiday, and the cranberry aromas compliment a turkey dinner if your goyim friends trick you into a tryptophan-heavy meal.

Aftertaste:  Biscuity finish, quite well balanced. Tartness is quickly whisked away in a refreshing finish.

Overall: It’s still the early days for this east end brewery that opened in October, but they’re off to a solid start.  Beer is guaranteed to confuse your Aunt Edna, who thought she was cool this year for buying some Mill Street Organic.