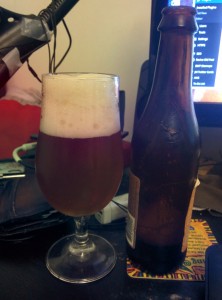 That photo beside this text is of the TBH Special. A beer made especially for us at Toronto Booze Hound by the folks at Fermentations. We shouldn’t feel TOO special though since every single beer made by these guys is custom to the person ordering it.

The idea with Fermentations is that they brew a beer to your taste and make it in large batches. It can take a few weeks to brew but you get award winning beer at a fraction of the cost of the LCBO and it is custom to what you want.

For this specific beer we visited them while we were bottling some wine they had made for us. During the visit we discussed our absolute love affair with the citra hop. One of the employees told us about a new hop they had gotten in from across the ocean. With that we had to try it, so they devised an IPA using the imported hop and thus our beer was born.

This beer is only available in our fridge. If you’re a friend of ours we will happily share some for free. We have no idea what the ABV is but probably around 5%.

Appearance: Nice burnt gold colour. Pure white head that lasts. Filtered.
Aroma: Grapefruit and banana at first with the breadiness in the back bone. A little hint of clove maybe.
Taste: Super fruity to begin. Lots and lots of that grapefruit. Some orange and lemon come in as well. Then the fruityness comes a bit later and the banana blends beautifully with the soft malts.
Aftertaste: Simple, clean and dry.
Overall: A great beer.