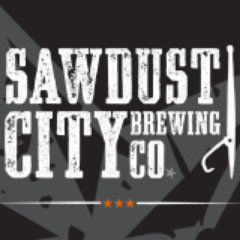 I got a chance to interview Sam Corbeil of Sawdust City. It’s no secret that Sawdust City is one of our favourite brewers. You can find our review of their Lone Pine IPA and their Red Rocket Stout here!

Why did you start your brewery?

When I left my old career to go to start brewing school in Germany, my only goal was to start a brewery. There was no other choice. It was something I just needed to do.

How did it begin? Contract?

It began as an idea between my business partner and President of Sawdust City, Rob Engman and my self. We got together at my brothers beer festival, Session Toronto, back in 2010 and decided that we had a shared vision for how a brewery should be. Then we had beers. And as they usually do, beers brought the vision into focus. In the following four years, we went from contracting at Niagara College, to brewing at Black Oak to finally opening Sawdust City in July of 2014.

The name…. where did it come from?

Sawdust City is actually an old name for our hometown Gravenhurst, ON. Back in the day, Gravenhurst was a logging town and there
more than 20 mills in town. With all the logging taking place, it earned the nickname Sawdust City. When we were looking for names for the brewery, I hit the Googler and came across the name on Wikipedia. I thought it had both a contemporary feel to it, while still giving a nod to the towns history. Also, I thought it just sounded cool.

Where there any big issues with getting started?

We were starting a brewery…everything is a big issue. I could honestly fill entire pages with the issues you deal with on a daily basis, but I don’t think that would be a very interesting read. But yeah, we had issues, from securing a space to purchasing brewing equipment. From “should we contract?” discussions to finding and dealing with new licensees. From legal issues and permits to ingredient suppliers, literally everything was an issue. Those were just the things that popped into my head right now, but there were certainly more. You are learning as you go, so it’s a continuous uphill battle. Ultimately it’s rewarding and going through the motions and dealing with each and everyone of those issues personally only serves to help make you and your business stronger…. but dang…there were days where you weren’t sure that it was ever going to get better, or if it was going to be worth it.

Be honest – is there a beer you really wish you hadn’t made?

I’m not trying to be cocky but I don’t regret any beer I ever made. I’m not saying that I never made a mistake, cause I most certainly have. And I’m not saying I’ve had batches that didn’t work out, cause I’ve had those too. But each mistake and each brew is just another chance to learn. The only way you can ever expect to get better is by failing. Without failure, how would you know when you finally do get it right?. So, even if I made a beer that didn’t turn out the way I intended, I don’t say, “I wish I didn’t brew that”, I just take what ever learnings I can from it and apply it to the next brew.

The opposite: what’s the best beer you’ve made?

That’s tougher to answer cause I’m proud of all the beers we make, we’ve put a lot of effort into each one. And with all our brands I look at them as a work in progress. We try to be consistent and for the most part we are, but we are always looking to make it better. Always tweaking and trying to improve. So I guess, my answer is, I haven’t made my best beer yet. I’ll let you know when I do.

What got you interested in starting that canning operation?

Truthfully? It started because I hate labels and labelling. The thought of it just makes me angry. But over time, I just grew to like cans more. The more I researched it, the more I began to like cans as our main package. And now as the technology becomes more available (by which I mean affordable) for microbrewers, I just felt cans were the right choice.

Are there any competitors that you really respect or look up to?

Firstly, I don’t really look at anyone in craft brewing as a competitor, I look at them as a compatriot. We’re all in this together. As for who I look up to and respect? I really look up to Frederick Tremblay from Microbrasserie Charlevoix. Outside of being a great brewer with a stable of world class beers, he’s also a great human being. Really friendly, welcoming and willing to teach. Closer to home, I’ve learned a lot from the few times I’ve worked with Ryan Morrow at Nickel Brook Brewing and I think he deserves a lot of respect for the beers he’s brewing there. And during our time at Black Oak, I learned a lot from the team there. They opened their home to us and allowed us to grow. And I think John Hodd, the brewer there is doing some really good things.

What are some challenges you still face?

Well much like that other question, we face challenges on a daily basis. Many of the issues we faced while opening are still there and every day a new on seems to come up. But I guess that’s what makes it exciting. If it were easy, everyone would do it, as they say.

Any thoughts on the beer store?

Yes. I think they carry a lot of bad beer.

Any favourite bars in Toronto?

I love the boys at BarHop they’ve really supported us
from the get go, plus it’s a great place for a pint. WVRST is great too, I love the atmosphere there. The Only Café, BarVolo & C’est What? are all institutions in my mind and I visit them whenever I can. Bryden’s in the westend is just so comfortable and has the best GD nachos. And The Wren in the eastend has become one of my favourite places to go…the chimichanga (sp?) is amazing. There are ton of great spots, but those are some of my faves.

Thanks so much Sam! You can find Sawdust City beers in LCBOs across the city.

One comment on “Sawdust City’s Sam Corbeil, an Interview”