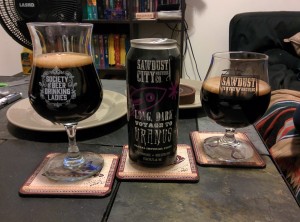 It’s the most wonderful time of the year. Gravenhurst, ON’s superstart craft brewery, Sawdust City Brewing has released their absolute best seasonal brew – their hilariously named Long, Dark Voyage to Uranus, a Uranal Imperial Stout. If you follow us on Twitter, you will know that we have an unhealthy obsession for this beer and that we are hoarding a bunch. I almost want to tell you that it’s lousy, so there’s more for me out there. But I won’t. I’m selfless. But it really is *that* good. We only harass brewmaster Sam Corbeil on Twitter a few times a week about how excited we are about LDV being released.

The finished product changes from year to year. The 2015 vintage comes in a 473 ml can for the first time ever, and it’s stronger this year than previous releases at 10.2%, and retails for $5.25 at very select LCBOs. That’s one heck of a strong ass beer. Please share the decadence of Uranus with a friend, OK? Previous incarnations have included a batch aged in Scotch whisky barrels, and the grossly named Bloody Long, Dark Voyage to Uranus featuring the addition of tart raspberries.

We sampled a can in a balloon glass and in my tulip-style glass from the Society of Beer Drinking Ladies. It tasted better in the tulip. The can includes the very important information about Toftorg Golshop, Ruler of the Third Empire of Uranus.

“What’s in a name? Uranus by any other name would smell so sweet. That was written many eons ago by Toftorg Golshop, Ruler of the Third Empire of Uranus on one of his many voyages to earth (it was stolen and rewritten by ‘you know who’ sometime later).

And while on earth for one of those trips, Toftorg grew fond of the rich, robust stouts of Northern England. Designed to withstand the gruelling voyage from Earth to Uranus, Long Dark Voyage is a Uranal stout of the highest order. Tongue crushingly bitter and dry as a bone, 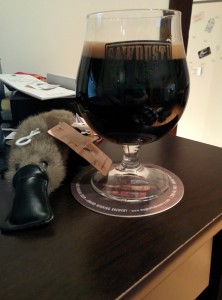 this dark chocolate treat is quite dangerous and will sneak up on you from behind if you don’t keep your wits about you. You’ve been warned! Enjoy the decadence of Uranus with a friend.”

I’m obsessed with LDV. I first encountered it with a friend at The Only Cafe in 2012, and I ordered it because of the name. I had never heard of the beer before, nor the brewery. I was hooked. I still have the label from that first bottle, stuck on the case of my Kobo. I tried to find a bottle for Kole to try on one of our early dates to Bar Volo to make sure he had good taste, but it was the wrong time of year. And I’ll head out on a bone chilling Tuesday night in February to a launch party at Thirsty and Miserable because the only thing better than LDV is LDV on tap. OH GOLLY.

Taste: Espresso, caramel, and dark chocolate. Undertones of wood and bark, dry mouth feel. Does velvet have a flavour? Silky and rich mouth feel, thick on the palate.

Overall: Enjoy the decadence of Uranus with a friend. Or leave some for me. I’m OK with hoarding this one.