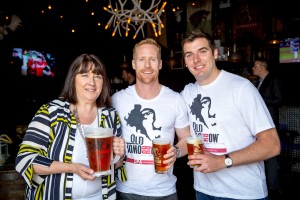 There on the left is Monty. Better known as Jon Montgomery, Olympic Gold Medalist best known for grabbing a pitcher of beer from a passerby during his gold medal celebrations and drinking it while walking the streets.

He also happens to be the host of Canada’s The Amazing Race.

He teamed up with Old Tomorrow to launch Monty’s Golden Ryed Ale.

While the beer was officially launched at Sessions ‘Collaboration Nation’ competition, they held a small press gathering to show off the beer before the festivities.

The beer itself is their standard CPA (we reviewed it here) that has been aged in rye. I love anything that’s touched wood so I was hooked from the description alone.

The event took place at Chill Ice House, a cool venue (quite literally) that has two rooms. The first is more like a club but at -4 degrees. It’s kept this cold because it is filled with ice sculptures and has glasses and steins made with ice. 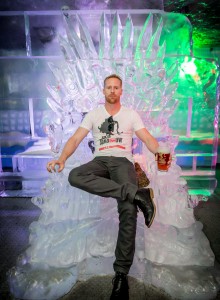 The second room was the one I was more in love with. It is set up as a warm ‘speakeasy.’ They have a pretty good collection of craft beers and a nice list of cocktails. 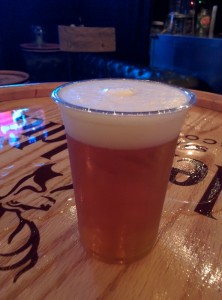 Appearance: Dirty gold, nice white head that fades pretty quick.
Aroma: Sweet and smokey. Nice cherry hints. Caramel.
Taste: The smokiness remains, as does the cherry. Get some vanilla as well as a bit more of the caramel.
Aftertaste: A soft bitter hops. Hints of apple.
Overall: A unique taste that I hope goes beyond just the Sessions festival.