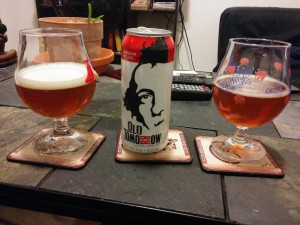 In celebration of Canada’s first Prime Minister, Sir John A. Macdonald’s 200th birthday this past weekend, we cracked open a fresh can of Old Tomorrow‘s Canadian Pale Ale. Not quite an India Pale Ale and not quite an American Pale Ale, the CPA is a fledgling style that is slowly starting to find its own identity. Sounds a lot like being Canadian, come to think of it – we’re definitely not British, and we’re definitely not American, but we’ve got a lot of great cultural references from both countries. Why shouldn’t a beer deliver the same kind of distinct story?

The Macdonald family started producing this new brew in fall 2014, and the packaging is 2 parts Sir John A. Macdonald, 1 part smirking face of Pierre Elliott Trudeau (at least to me). A tall boy will set you back only $2.95 for a 473 ml can at 4.9% ABV, a pretty decent value if you’re looking to try something new. I was just excited to try a can with the word Canadian on it that didn’t belong to one of the Big Brewers.

We split this in two balloon style glasses, and I was very pleasantly surprised.

Appearance: Super fizzy on the pour (we made a bit of a mess opening the can). Rich dark amber colour.
Aroma: Floral hoppy aroma.
Taste: Sweet and velvety smooth mouth flavour. A mix of rye and barley malts produce a unique and balanced flavour palate.
Aftertaste: Sugary aftertaste with mango hoppy flavours that fade fast.
Overall: Really satisfying, we’ll buy it again. This says a lot, I threw a bit of a tantrum tonight that beers have tasted off to me over the last few days, but this one didn’t incur my wrath.

One comment on “Old Tomorrow Canadian Pale Ale, a Review”