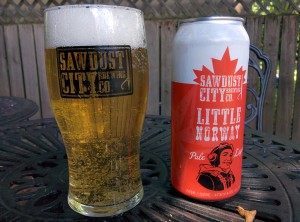 We are far too addicted to Sawdust City.

One of these days the guys there are going to file some kind of official paperwork not letting us talk about them any more. It’s just too creepy.

We’ve met them at numerous occasions, usually while all of us were heavily intoxicated.

Something we have noticed recently is that the lager seems to be coming back in style. While in the past most brewers stuck with lagers because they were well known and ‘safe’ there was a short period where the idea was to make the most ‘out there’ beer possible.

Now that we’ve gotten pretty far over the edge of ‘out there’ (doughnut flavoured?) breweries are starting to pull back and get back to their roots.

According to Sawdust City, this beer was brewed in collaboration with Arendals Bryggeri, the second oldest brewery in Norway, hence the name.

You can purchase a can at the Sawdust City Retail store and it sits at 5% ABV.