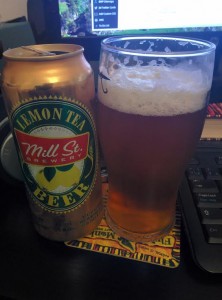 Surprisingly one of the first beers I tried by Mill St was their Lemon Tea Beer. While I’d like to say I was drinking them way back when they only had one beer, I simply can’t claim that. I’m an honest man.

The Lemon Tea Beer is a summer seasonal that mixes a wheat beer with earl grey and orange pekoe teas and some citrus.

On to tasting notes:
Appearance: Light golden colouring. Pure white head. Filtered.
Aroma: Lots of citrus, it over powers everything else. A slight sweetness, probably from some pilsner malts.
Taste: As I expected, tons and tons of citrus. Also picking up the Earl Grey tea here and it is very enjoyable. It ads a nice bitterness to it.
Aftertaste: Almost none to speak of.
Overall: A nice refreshing summer beer.