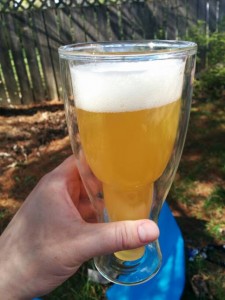 In my last review of Mad & Noisy I spent a large part of the review pointing out that it was a brand created by Molson to be a ‘fake’ craft brewer.

That was a tad harsh of me.

Yes, Mad & Noisy is owned by Creemore Springs which itself is owned by Molson, but I should focus on the beer itself, not the politics behind in.

With that in mind I grabbed a couple cans of their summer seasonal: Hop & Weizen.

This is a wheat based beer that supposedly combines both the sweet banana like flavours of a German style wheat beer with the strong grapefruit hop profile of West Coast beers.

While I certainly picked up on the wheat, the hops was almost impossible to taste. At only 17 IBU’s I can see why. To put that into perspective, the average IBU of a West Coast IPA sits between 40 and 70.

Appearance: Light gold or yellow. Straw like. Thick white head that stays well. Unfiltered.
Aroma: Banana hits first and other tropical fruits. Soft bread like malt backbone. A little vanilla.
Taste: The same as the aroma – lots of banana and bread. A little hops, but nothing like an IPA. Not sure what they mean by West Coast vibe, there is no grapefruit I can pick up. Just the wheat beer character.
Aftertaste: Subtle and soft.
Overall: A great wheat beer but nothing that blows my mind.