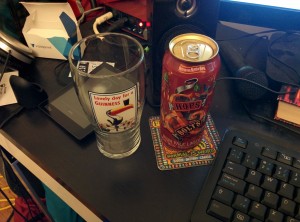 Look at that can. It just SCREAMS ‘craft beer.’ It’s fun, it has a creative name, it’s brightly coloured and really stands out at the LCBO.

When you take a closer look it tells you that it’s ‘Not for the Faint of Hops.’ That’s a great tag line. And it’s an India Pale… Lager? An India Pale Lager? That’s different. It must be made by a craft brewer!

The can says it’s brewed where the mad and noisy rivers collide. Must be out in the country somewhere. Oh, it’s made in Creemore. Hey, Creemore Springs is there, maybe it’s a contract to them!

Mad and Noisy is a part of Creemore Springs.

Molson knows that the craft brewing scene is exploding and also knows those who like craft beer avoid Molson like the plague. So they have to hide it.

I must admit I like the packaging of this product. I also enjoy the branding. It has a ‘mad scientist’ feel that I can get behind. The problem is knowing it’s a Molson product put a sour taste in my mouth, before even sipping on the beer.

They call this beer an ‘India Pale Lager.’ This isn’t actually a thing. I think they were going for an India Pale Ale but didn’t want to go too hoppy as they would scare some people away.

Here are my tasting notes:

Aroma: Hoppy, makes me think of an IPA for sure. Floral and somewhat sweet.

Taste: More of that hoppyness but mixed with some nice malts. Darker than expected. Certainly not an IPA, which I guess is where the ‘pilsner’ part comes in.

Overall: Surprisingly good for a macro product. It’s a unique twist on pale ales which have honestly been done to death. Might be a good introduction to craft beer as it can be found all over the city even in bars you wouldn’t expect craft beer in.

One comment on “Hops and Bolts by Mad & Noisy, a Review”