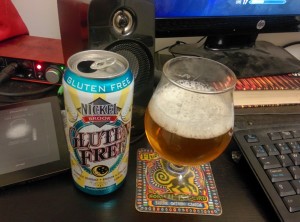 It’s probably important that I start this review with that bias in mind.

It may sway how I feel about the beer. Make me like it more just because I like the company that made it. There is a lot of scientific evidence out there that shows this affect is real.

Let’s talk about the beer though:

This is a 100% gluten free version of beer that is made for those who are intolerant of gluten. It’s a rising trend at the moment to make gluten free products. Hell, we’ve already reviewed one other gluten free beer on this blog.

There is plenty of debate around the existence and prevalence of gluten intolerance, but one thing is for sure: as the trend grows, so does the selection of products available. More selection is always a good thing!

This beer is described as pale ale style by the company, meaning I should expect a bit of hoppyness and some bitter but it should be mellowed out by some nice malty notes.

Appearance: Clear and gold. White head.
Aroma: Somewhat sour and hoppy. A hint of pear maybe?
Taste: More sour which is surprising. Soft mouthfeel. Somewhat sweet. The malt certainly mellows out the hoppyness with some light caramel notes but that sour undertone kind of kills the enjoyment. There is some apple flavour hiding in there somewhere but it’s lost in the mix.
Aftertaste: The sour stays. Wonder where it comes from?
Overall: I can see this being somewhat enjoyable to some and certainly sessionable but that sour undertone just ruins it for me.