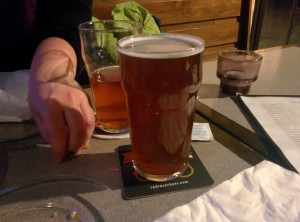 A few nights ago we tried out the brand spanking new Duggan’s brewpub. We’ll be doing a thorough review of that place but shortly after visiting we headed over to the Rhino. The Rhino is one of my favourite pubs in the city, mostly due to it’s massive beer list.

At the Rhino I had a pint of Top Hat Ale by Snowman Brewing Co. It’s fitting that I tried it there since the last time I gave the brewery a try was a beer fest at the Rhino about a year earlier.

The Top Hat Ale is an English style amber ale that is 100% gluten-free. I should mention that all of Snowman’s beers are gluten free. This can be an absolute life saver for those who are gluten intolerant and absolutely sick of ciders.

Taste: A bit watery, could use more hops. Soft mouth feel. Bit too sweet. Little citrus. A little nutty after a few sips.

Aftertaste: Hops with a bit of earthiness to it.

Overall: For a gluten-free beer this is quite good. It was a bit weak in flavour but I’m a lover of flavours that punch you in the face. This one is more subtle. For those that are gluten intolerant it can be a nice respite from ciders.

One comment on “Top Hat Ale by Snowman Brewing Co, a Review”