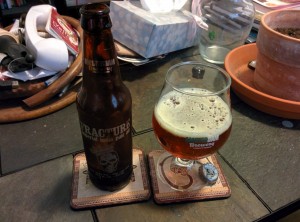 With the news that Mill St. had been purchased by ABInbev my first thought was to look over at Amsterdam Brewery with fear. Somehow my brain concluded that they would be next.

Luckily when I tweeted them they said they are embracing their proud independent past. To be honest it wasn’t much of an answer but at least they aren’t being purchased right this second.

Fracture is one of the oldest beers by Amsterdam. It’s a behemoth of an IPA that they call an ‘ode to hops’ right on the bottle.

From the description on the website they take a crap ton of hops and throw them in the boil and then go ahead and dry hop the living hell out of the beer.