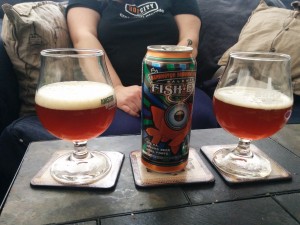 I absolutely LOVE pedestrian sundays down at Kensington Market. It’s a chance to soak in the atmosphere of a place filled with hippies, street musicians, ethnic food and more.

On one of these sundays many years ago I discovered Kensington Brewing Company. A small craft brewer based right in the market itself.

They were having a backyard party sort of thing that I still have photos from.

At this party I had a chance to try Baldwin FishEYE-PA for the first time. It’s a well balanced IPA that is named after the hard working fishmongers on Baldwin st in Kensington Market.

I didn’t take proper tasting notes back then but I did with my most recent can.

Here are those awesome tasting notes:

Appearance: Unfiltered with an orange ruby colour. The head is off-white.
Aroma: Lots of hops but balanced well with a darker malt. Bit of tangerine and orange. Lots of citrus and some caramel.
Taste: Refreshing with a soft mouth feel. The citrus hits first but the malt mellows it nicely. The tangerine is awesome.
Aftertaste: Caramel and mellow. Very malty for an IPA.
Overall: A nicely balanced IPA.