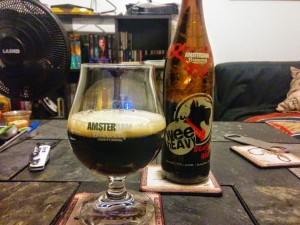 It has a Scottish Terrier on the bottle.

And it’s a scotch ale.

Of Course Kole McRae is going to pick up a bottle. It’s like they brewed this just for me!

Scotch Ales, as the name implies come from Scotland. They generally don’t have much in terms of hops but instead rely on the sweetness of the malt and a bit of smokiness. The wort goes through a long boil process that gives it a sweet flavour and a nice dark brown colouring.

This is a winter seasonal from Amsterdam which makes perfect sense as scotch ales are generally great for warming up a cold winter’s day.

Originally Amsterdam’s scotch ale was called the ‘Tilted Kilt,’ I’m not sure why they changed the name but that’s their choice. ‘Wee Heavy’ is actually one of the names scotch ales can go by.

You can pick up a bottle at the LCBO for $4.25 and it sits at a wee heavy 6.2%. Since this is a winter seasonal their wont be many left.

Appearance: About a finger of head. Opaque. Dark brown and red.
Aroma: Tart with citrus at first, mostly lime as far as I can tell. Mellows out into caramel and dark espresso.
Taste: Much more espresso and a bit chocolatey. Complex malt notes show up. Still a hint of citrus. Caramel at the end.
Aftertaste: You get the first real hit of hops here, giving it a bitter end.
Overall: Quite good. Surprisingly complex.