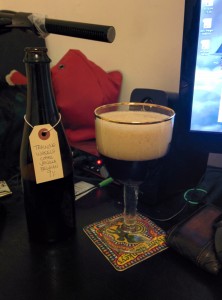 We’ve always been a fan of the Indie Ale House. Heck, recently we joked that whenever we visit Bellwoods we end up visiting Indie Ale House shortly after. They just make great beer (and wonderful food!) so we always end up having a great time.

On our most recent trip I happened upon this gem during a 5 beer flight. I didn’t notice the ‘Belgian’ bit in the name and just saw the Coffee/Vanilla, two flavours I love to see in beer.

The Belgian bit was just icing on the cake. I love the spiciness that Belgian yeasts give and it’s certainly apparent in this beer.

After falling in love with it I ended up picking up a bottle from the retail store on my way out.

You can purchase this beer only at the Indie Ale House (it doesn’t even have a label yet!) and they generally don’t do LCBO releases. You might get lucky and find this at one of the better beer bars though.

Appearance: Dark brown to black with a nice thick off-white head. It’s Belgian style so chances are it’s unfiltered. Hard to tell with the dark colour.
Aroma: The Belgian yeast gives it a beautiful spiciness. Cloves and cinnamon are present. Nice strong vanilla hint. Oddly not much coffee in the aroma, maybe it comes up more in the taste. I made sure to warm the beer a bit before this, so the cold shouldn’t be hiding any of the smells.
Taste: There is that coffee I was looking for. Some alcohol warmth and less of that spiciness. The coffee kind of hides everything but the vanilla which adds a nice hint to it. It’s surprisingly sweet too.
Aftertaste: The bitterness of the coffee lingers.
Overall: A bit too much coffee but certainly enjoyable. I would happily order again.