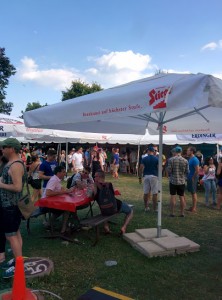 The entire experience started on the right foot:

About a week before the Festival of Beer we got an email saying we had been approved for a media pass. It would have been nice to know a little bit more before hand but at least we had SOME warning, not to mention it was nice to get a pass to a sold out festival.

I should mention that both Shawna and I have been to the Festival of  Beer numerous times in previous years. Last year we went as VIP and the year before as just regular citizens, so it was nice to see the different experiences.

So lets cover the media experience:

Similar to the VIP experience of the event, you don’t enter the same gate as the regular ticket buyers. Instead you are instructed to go to a special media gate where your name is on a list.

They then give you the standard beer fest cup and two drink tickets. These tickets are NOT standard beerfest tickets but are instead media drink tickets that allow you to have two Sleeman beers within the media zone itself. This is probably due to Sleeman sponsoring the tent and footing the bill for those beers. We have to buy tickets if we want to try anything else.

Not that we are complaining, we appreciate the free beers on a hot day.

Once given our tickets we were escorted directly to the media tent which had a pretty red carpet and insanely comfortable leather couches. Sleeman had three beers available: their original, a light coconut water based one and a smoked beer.

The media tent included a private bathroom (which is a god send), a place to charge your phone and a basket you can use to store stuff while you explore the festival.

We had one of our free beers, said hi to a few members of the media, stored some of our stuff and went off the explore the festival.

Bandshell Park is where the festival has taken place for a few years now. This is a very large park area and yet somehow they sell out the event every year, so as expected the place was VERY full. It seems beer is quite popular.

Right after leaving the media tent you are greeted with the type of beer tent that takes up most of the grounds: A macro. Miller light has only recently entered into Canada so they had taken up a nice big section to advertise the product. Near them you can also find Budweisser’s area which includes a ‘Bud Light Life’ section along with their other core brands (including the new RITA brands.)

I’m not going to go into too much details about these areas, but you’ll generally find lots of games and unique experiences along with plenty of their beer. It can be a lot of fun, but no where near as fun as exploring the new beers over at our favourite section: local brews!

If you get past the macro’s you’ll find the tents dedicated to the local brands. While the little guys can’t afford the same level of games and fun as the macro’s they had plenty of their beer on offer. Sadly we didn’t find much in terms of beers we hadn’t tried from them, but we aren’t exactly the average consumers when it comes to craft beers. We did try a Belgian style quad from Snowman that was very interesting.

These tents take up the area around the stage and seem to grow every year. I could be wrong though as after the free beer and a few of the locals we were starting to get a bit ‘blurry.’

That was part 1! Read part 2 tomorrow!