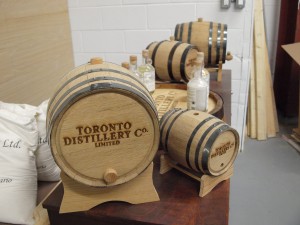 Toronto boasts a Distillery District, but the story of Toronto’s newest distillery takes place in an industrial corner of the Junction, near the Stockyards. Toronto Distillery Co is Toronto’s first new distillery to jump through the licensing hoops since 1933, not long after the temperance movement fizzled in Ontario. As a testament to the fact that Toronto is a quirky little place, the Junction was actually dry until 1997 (this means there are Scotches still aging in their barrels that pre-date the change in legislation, or kids today in Toronto who are almost old enough to drink, but had prohibition on the books in their neighbourhood growing up). It seems fitting that Toronto’s small batch organic spirits come from a neighbourhood that had prohibition on the books until recently. The distillery is actually next door to the Junction Craft Brewing‘s tap room. Their finished product is available in select LCBOs and New Brunswick liquor stores, or direct from the distillery itself.

To call the product a Canadian whisky is actually a bit of a misnomer. In order to call the finish 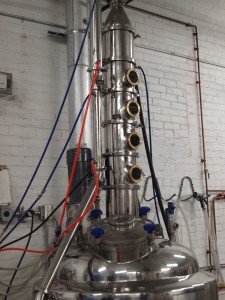 ed product a Canadian whisky, the spirit must be mashed, distilled and aged three years in Canada. In operation since 2012, no finished product from the Toronto Distillery Company meets the three year aging minimum requirement. Yet. A storeroom filled with barrels hints at a forthcoming genuine Canadian whisky.

Co-founder and amazing moustache wearer Jesse Razaqpur showed us around the distillery. A truly local product, their grains are sourced from local organic farmers and their barrels are a variety of Canadian woods, including a rare hickory barrel – and a selection of rare barrels coopered in Ontario to boot. Unlike a traditional whisky, the focus is not as heavily oriented on the barrel. Toronto Distillery Company is focused on the flavours of the grains, since the barrel can hide a lot. Sipping their product is an education in flavours – a diversity of flavours I’m not used to finding in spirits. “You can distinguish the harvest flavours from batch to batch,” said Razaqpur. With rye, you get a spicy flavour in the grain. The finished product is a raw clear spirit, suited for a local terroir sampling series. 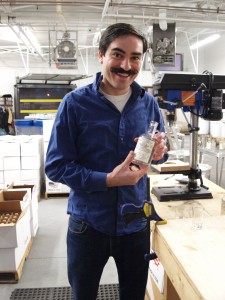 The stills are actually hybrid stills, designed for vodka and whisky, but adaptable to a versatile product line. Small batch distilling allows for experimenting with unique innovative flavours and grains, bringing a sense of creativity back to distilling. Craft distilling has not yet taken off as a movement in Canada due to bureaucratic hassles (this wouldn’t be a story about distilling in Canada if there wasn’t a mountain of red tape), but our neighbours south of the border enjoy the support of the American Distilling Institute.

Opening a distillery in Ontario is a legal nightmare, and the legal hurdles are the biggest frustration.  Fortunately for the Toronto Distilling Company, the two founders are also trained lawyers well equipped to take on the challenge. “We did it all on a wing and a prayer,” explained Razaqpur. Curious about the ridiculous amount of red tape involved in legislating alcohol sales in Ontario? Check out this fabulous crowd funded documentary called Straight Up: The Issue of Alcohol in Ontario.

But what did the finished product taste like? We sampled 2 offerings: Batch 4 (Soft White Winter Wheat) and Batch 1 (Rye). 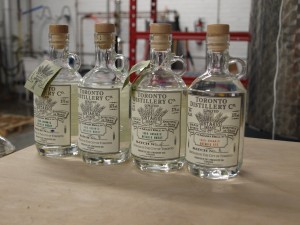 Batch 4: Clear. Looks like water. Or vodka. Or gin.

Batch 1: Also clear. This is a young spirit, and the first offering they made.

Batch 4: Strong wheat aroma, almost a freshly made bread aroma from the grains. It had hints of pastry flour.

Batch 1: Cinnamon aromas, as if infused with an esther of cinnamon. Not what I would expect from a rye.

Batch 4: Strong grain flavours, with a hint of liquorice. A nice, balanced sweetness. We sipped this one all on its own, and we could easily enjoy sitting back with a dram of this one.

Batch1: Very sweet flavour with out the typical vanilla or caramel flavours we’re used to from other Canadian ryes. We sipped this one all on its own but we immediately started planning cocktails to make with it, if we could get our hands on an obscure bottle. 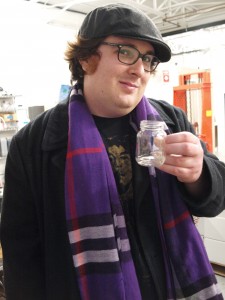 Batch 1: Spicy and dry at the back of the throat.

Batch 4: This one is a great stand alone sipper. Don’t use it as a mixer, as you would hide all of the lovely flavour profiles of the grain.

Batch 1: This one seemed like a great cocktail mixer for citrus oriented cocktails, or a nifty twist on the Tom Collins. It would make a nice digestif over some ice cubes as well.