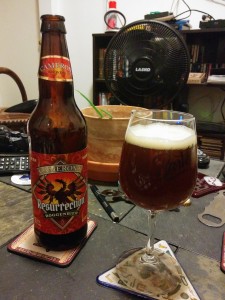 I’ve honestly always been a fan of rye beers, despite them being outlawed in the Reinheitsgebot (Bavarian Purity Law) of 1516. I’m not going to let a 498 year old notion of what I should drink influence me! But I also made potato latkes with sweet potato today, so I guess I’m a bit of a rebel? We had these as a break from deep frying, and everything in our home smelled like potato and oil. My tasting notes had the word rye underlined three times with many exclamation marks, so I can only assume I was really excited.

Oakville’s own Resurrection Roggenbier is brewed with a combination of German rye, malted wheat and two-row barley. Why, that’s practically enough ingredients to qualify as a salad! And at $5.95 for a 650 ml bottle with 5.2% ABV, it’s a lot more fun than a salad. I had to convince Kole it was time to have another rye beer so soon after the Riptide Rye Pale, but since it’s my 8 beers of Chanukah, I won. We split this one between two white wine glasses again, since apparently that’s what I’m using for this series. 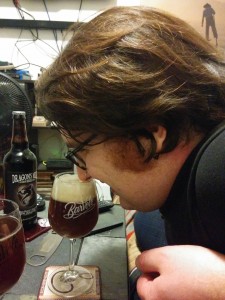 Overall: Nice flavour, but I think I’d prefer this one in the smaller bottles. As much as I like more rye beers, more than a pint is overkill on the taste buds. I think it would pair nicely with cheese, since there is a definite pepper flavouring from the rye. And anything that delivers more cheese to my face is a winner.