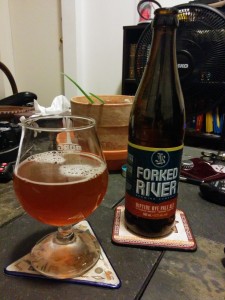 Rye adds a certain je ne sais pas quoi to a beer – a spiciness that compliments the hops in a delicious way. Firmly raised on smoked meat sandwiches served on fresh rye bread, I find the addition of this grain a welcome palate teaser whenever it comes my way. I was excited to find a few bottles of Forked River Brewing Company‘s Riptide Rye Pale Ale on a lonely shelf in a downtown LCBO last week, and I knew I just had to give it a go. Rye is substituted for a portion of the barley malt, and the resulting colours and flavours are always exciting. I first discovered the style years ago in Montreal at Brasserie Benelux, and I will always pick up a bottle or a pint of rye beer whenever I find one available. I like my brews malty, spicy and full of flavour.

Forked River Brewing Company has been brewing since 2013 in London, ON. I haven’t been to London since 2011, so Forked River was not on my radar at the time. This is the first time I’ve seen their products in the LCBO, and I’m always excited to try something new. I didn’t know what to expect. A 500 ml bottle will set you back $3.50 at the LCBO ($3 at the brewery) for their 5.7% ABV concoction, a good value. I didn’t spot any of their Capital Blonde Ale, but their website proudly boasts that this beer is the winner of the 2014 Canadian Brewing Award for a North American style blonde/gold, so they must be doing something right! We split a bottle between the two of us and sampled it in balloon style glasses. In Toronto, they are currently available at Bar Hop, Thirsty and Miserable, and C’est What?

Appearance: Dark orange pour, rust coloured, very opaque in the glass, unfiltered appearance.
Aroma: Salty and hoppy aroma. Spicy. Our pet rats were extremely interested in the aroma of the beer – they love beer and wine, but it was quite the struggle this time to keep them out of our glasses. 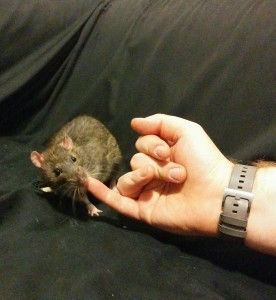 Usually it’s not such a fight!
Taste: Bold rye flavours, spicy first sip. It complemented the spicy Szechuan beef I had for dinner earlier in the evening. The humans very pleased with the amount ofhops. We gave in and shared with the pet rats, since we couldn’t keep them out of the glass anyhow. They couldn’t get enough!

Overall: We were very pleased with this one, and we’ll definitely pick it up again. We would love to try other offerings from Forked River Brewing Company. The pet rats hope we buy it again soon, too.