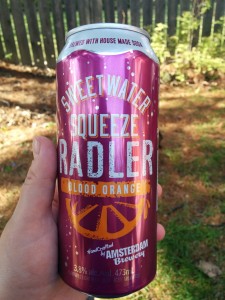 Summer must be right around the corner, because radlers are suddenly figuring more prominently on the LCBO shelves. A beer cocktail the combines a light coloured beer (a lager, pilsner or a hefeweizen typically) with another ingredient such as juice, radlers are desirable in warm weather for their thirst quenching properties. They also tend to be relatively low in alcohol, which is important when you’re sitting in the sun enjoying some suds. No one wants to be the guy who falls asleep in the sun and gets a nasty sunburn after all.

Amsterdam Brewery offers a blood orange radler called Sweetwater Squeeze Radler in their lineup, available in 473 ml cans at $2.85 a shot, weighing in at only 3.8% ABV. A few of my non-beer drinking friends swear by radlers, so I decided to give this one a spin. I was admittedly hesitant to have one – I’m not a huge fan of mixing my beer with juice. Last year I had the chance to participate in a product focus group at Samuel Adams, and their radlers & shandies left me desperately craving a beer to cleanse the palate. But Kole reminded me that 2 patio drinks in the summer, and I’m barely able to find my glass. So in the name of acting responsibly, I gave it a try. 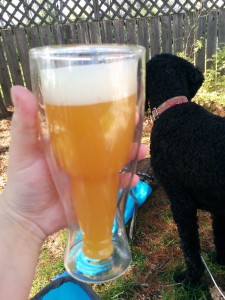