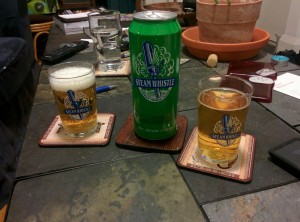 Today we discuss one of the most well known beers in Toronto. You can find Steam Whistle at basically every bar in the city.  Hell, they are the only beer available on Porter Flights.

According to the legend (and the radio ads) Steam Whistle started because three guys from Upper Canada Brewing Company were all fired when it was purchased by Sleeman. Originally Steam Whistle was called Three Fired Guys.

Their main ideal is to do one thing really well. Its why you’ll never see a bock or porter coming out of the roundhouse. Whether they accomplish that goal is completely up to interpretation.

Even if you are not a fan of the beer, I would recommend that anyone who comes to the city goes and does the Steam Whistle tour. It has lots of great info and is generally one of the more fun beer tours the city has to offer.

Appearance: Pure gold. Hardcore filtered.
Aroma: Barley at first and it turns a bit grassy but in a nice way.
Taste: You get more of that earthiness with the light hops and malty mix. Very light and refreshing. I should mention these flavours are very light.
Aftertaste: Almost none to speak of.
Overall: Light as you would expect with a pilsner. Great beer to relax and enjoy.