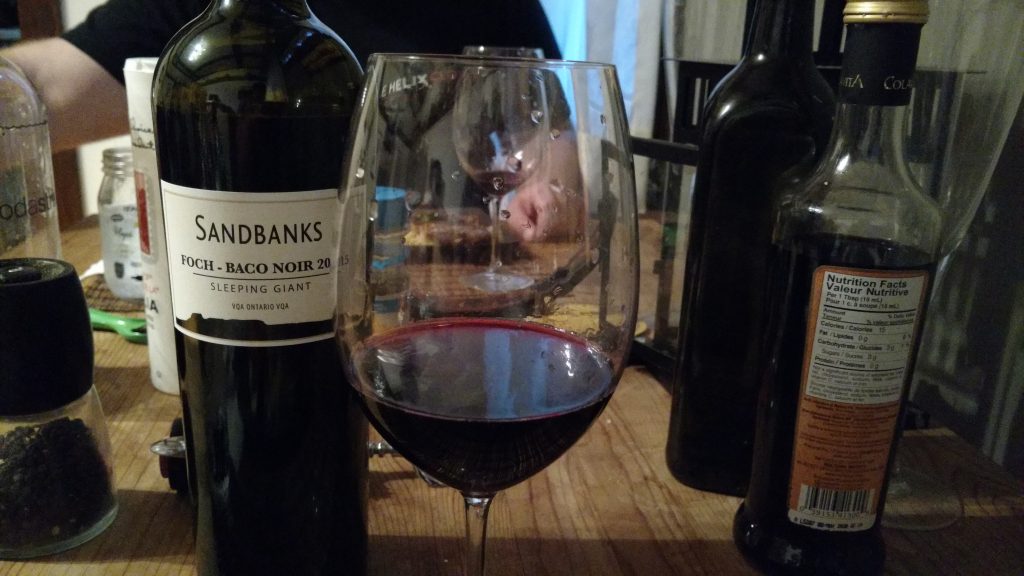 We visited Sandbanks Winery over Labour Day weekend on an impromptu road trip to Prince Edward County – the kind you decide on first thing in the morning. This was our third or fourth winery of the day (Kole was driving, thanks) and we had the opportunity to sample a new release straight from the barrel. We picked a bottle of the Sleeping Giant Foch-Baco 2015 straight from the vineyard for $19.95 (12.8% ABV), but it is also available straight from the LCBO for the same price.

Sleeping Giant is named after the Thunder Bay, ON area Provincial Park that is known for its breathtaking views over Lake Superior. I’ve never been to this part of the province, but it sounds lovely.

Sleeping Giant is a red blend consisting of Marechal Foch and Baco Noir. Marechal Foch is a lesser-known varietal, an inter-species hybrid French wine varietal that used to grow in the Loire Valley in France. It’s a cold-hardy and fungus resistant varietal and it does well in the Ontario climate (2015 was a nasty weather year), but it’s not a proper vitis vinifera wine grape. Baco Noir is a fairly Ontario-centric grape itself, and also a hybrid grape. I was intrigued by the two varietals since they are not traditional wine grapes, but do very well in our colder climate. It looks like 2016 will be overall a fantastic harvest for Ontario’s traditional grapes, so I wanted to focus on the hardier varieties from 2015’s lousy harvest. I applaud the choice to have an early ripening, cold-hardy and resistent varietal in case of shitty weather.

Sandbanks has a huge facility, with numerous tasting stations set up around the property so you never feel too crowded. They make the more accessible wines from this regions, and grow a tremendous variety of grapes.

Aftertaste: It tasted like purple? The red nibs came through.

Overall: An interesting mix of grapes and a good value full-bodied wine. Don’t bother with the 2016 harvest since all the traditional wine grapes are going to have a good harvest this year.