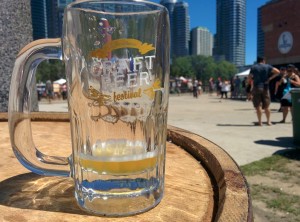 This weekend was a bit crazy. It started out with me going to Taste of the Danforth but quickly getting bored and a few of us doing our own TOTD across the great bars that are in the east end. That was a bit of a blurry night. Then on Saturday I hit up the craft beer fest going on at The Only. It was about $4 per pint there, so it was blurry to say the least. Sunday though was when I went to the Roundhouse Craft Beer festival and this is my experience:

It’s a Bit Awkward at First

I had not pre-purchased my ticket for the event so I had to buy my ticket at the door. For some reason this is a rather complex thing to do at this event. First you have to buy a ticket, which is a small piece of paper, then you have to go to a security guard to verify your age and then you grab a tasting mug (which was glass) and THEN you buy sample tokens so you can get on with the sampling. This has got to be the most convoluted way of entering a beer event I have ever had to deal with. The worst part was that none of this was very clear and there were no signs saying where you had to go.

Another complaint was that it cost $25 for the tasting mug (which is basically an entrance price) and you got NO tokens. Most beer events at least give you  a couple tokens. I believe this makes it the most expensive beer event in the city.

Once Things Got Rolling Though

That was the negative, lets move on to the positive. There was an incredible selection of craft brewers at the event and each had brought lots of beer to keep us cool in the hot sun.

This year the event was HUGE, craft brewers took up the entirety of the roundhouse area.

Not only that, there was also a very wide selection of food. From meat pies made like doughnuts to Chimney Stax, a delicious and unique type of sandwich.

One of my favourite parts was the live music. The talent shown on that stage was incredible. It was also at a perfect volume. You could hear it well but you could still have a conversation without yelling. One nice touch was even if you were far away from the stage they had speakers set up so you could still hear the live music.

Overall: I had a great time. The price and the convoluted opening lowers the mark a tad but the beer and food selection very easily makes up for it.