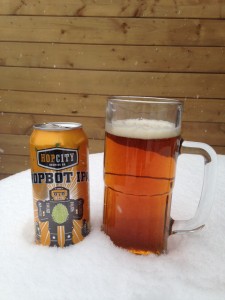 Someday, in the not too distant future, artificial intelligence will be advanced enough to produce robots with the ability to see, smell, and taste, thus making them able to produce and modify food and beverage recipes. However, primitive robots will lack basic human response to stimulus, therefore intensifying their taste choices to satisfy their complex and calculated cravings.

I can only imagine this is what Hop City had in mind when they made their HopBot IPA. Seriously, this thing is all different kinds of bold! Made from 5 different types of West Coast Hops: The Citra, Centennial Mosaic, Summit, and Williamette. It also has just enough malt mixed in to give it a really subtle finish the keeps the tongue guessing.

HopBot IPA packs an ABV of about 7.1%, but the flavour profile does a wonderful job at masking that.

Taste: Complex – there is a definite biscuit malt flavour that is residual from the initial bold hop flavour.

Overall: This is a really ambitious brew! It is not for the faint at heart who are on the fence about hop driven flavour. It is a refreshing spin on the West Coast IPA’s. Enjoy this beer for now, before the robotic masses enslave humankind.

One comment on “HopBot IPA by Hop City Brewing Co., a Review”