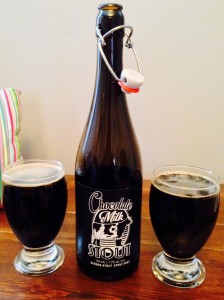 The first time I’d ever tried a Chocolate Milk Stout, it was at a brew pub about a 25 minute walk south of Wrigley Field called Atlas Brewing Company during Spring of 2013. Ironically enough, my wife and I had just witnessed the Milwaukee Brewers (go beer!) hand the Cubs yet another loss, and we were in need of a place to go drown our sorrows. We each ordered a round of flights and couldn’t resist trying the Chocolate Milk Stout. We sat in our booth hoping that once we’d returned to Canada, we could track down something similar to try from OCB.

When we arrived home we didn’t begin unpacking until we had searched out the OCB version of our favourite Chicago beer. We were ecstatic to find Wellington County Brewery had made a Chocolate Milk Stout – in 2012! – that was no longer available for purchase. I Tweeted at them a few times to see if there was any possibility this beer may return from the archives, and like the Riddler from Batman, Wellington was always very cryptic about their intentions.

A few weeks ago, my dreams became a reality when Wellington announced via Twitter that they were bringing their Chocolate Milk Stout back for a Re-boot series, just in time for Valentines Day! My wife and I drove out to the brewery this past Saturday to give it a try. Unfortunately, due to the intense cold of this winter, Wellington Brewery’s tasting room was closed due to a pipe bursting and soaking everything, but there was plenty of bottles left, so we will just have to plan a revisit for a tasting once everything gets sorted out (you won’t need to twist my arm).

Wellington County Brewery Chocolate Milk Stout is available direct from the retail store for $9.95 for a 750ml bottle and brings an ABV of 7.2% to the table.

What is Milk Stout? Simply put, its the addition of sweet lactose to the beer, that was made popular in the early 20th century by English brewers to mellow out the extreme punch of some porters and black beers. Made with fair trade cocoa powder, roasted malts, and just a bit of flaked oats, Wellington Chocolate Milk Stout is light yet robust.

Taste: Creamy milk semi-sweet chocolate flavour, very smooth, mild, and satisfying. It has a pleasant malt balance, there are a lot of things happening with this beer but none overpower each other. Silky smooth mouthfeel, almost no carbonation.

Aftertaste: a slight semi-sweet bitterness with just the right amount of milky tones.

At 7.2%, I was expecting a more Imperial Stout alcohol presence, but it just never came. I have seen others comment that this beer is very light for what they expected, however, given the history of the milk stout, that is pretty well exactly on point with this genre of beer. I found Wellington’s Chocolate Milk Stout to have nice harmony – all of its ingredients serve a specific purpose and work well together as a unit. I really enjoyed this beer, it exceeded my expectations from my first experience with Chocolate Milk Stout.