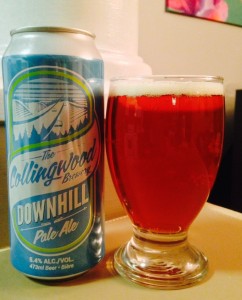 Collingwood Brewery – their beers are available at 68 establishments, 76 LCBO’s, and as of a few months ago, directly from their tasting room. Admittedly, I have never really heard much about this brewer until I stumbled upon its captivating can design while walking the OCB aisle at the LCBO in Barrie. I have a bit of a soft spot for campy beer branding that plays up on the local attractions in the area. Now, don’t expect to walk in and find beer after beer paying tribute to every bunny hill run Blue Mountain has to offer, Collingwood Brewery’s current roster offers just 3 beers (for the time being).

Downhill Pale Ale boasts that it’s recipe only contains 4 ingredients, which gives it a “firm maltiness” and an “assertive hop character”. Downhill Pale Ale is an APA with an ABV of 5.4% and is available in select LCBO’s (76 to be exact) across the province in 473ml cans for $2.85.

Aroma: Nothing to intense for an APA, some really light zest of orange scent and a faint toasted malt aroma.

Taste:  Bitter palate throughout, earthy malt flavour with an odd fruitiness to it. There is an orange citrus hop profile to this, but it’s pushed to the background by the “firm maltiness” and “assertive hop character”.

Aftertaste:  Dry with some grassy hops.

Overall, this is a really different approach to a Pale Ale. Collingwood Brewery is not redefining Pale Ale here by any means, but they have certainly put their spin on it. I find the bitterness to this beer not so much hop driven, but rather more a dry biscuit malt character. I will revisit this in the future, for I strongly feel this is one of those beers that’d goes best as a compliment to a spicy meal, let’s say, the next time I get a craving for some jerk pork. As a beer to order as an unwinder on Friday evening after the long weekly grind, I don’t know if this beer has convinced me yet.

There is always a silver lining though! You, as an individual with your own thoughts and opinions, get to make your own decisions on what you do & don’t like – so go ahead and give it a try – then leave me a comment telling me why I’m wrong.

I look forward to hearing from you.