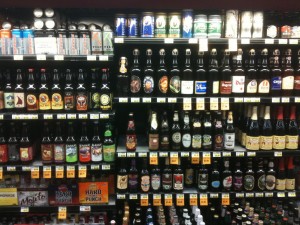 Kathleen Wynne has been teasing us with ‘big changes to come’ for the alcohol and liquor laws in our fair province (Ontario.) We were all a little disheartened when she recently declared that alcohol will NOT be sold in convenience stores which is one of the shakeups we were all gunning for.

At least today we got some good news.

According to the Toronto Star (warning, auto-playing video) we will soon be able to buy beer and wine from major grocery stores. Sadly the Toronto Star does not say who the sources are that gave them this information but it’s exciting to say the least. According to the sources the Liberal government has been in talks with major grocery store chains and the beer would be sold in it’s own unique isle.

It looks like this only applies to beer and wine at the moment. Distilled spirits will continue to only be available at the LCBO “for reasons of social responsibility.” Don’t get me started on that…

There’s a lot of talk about how this will effect The Beer Store. This ease of access combined with the new franchise fee being levied per store means profits (well, lack of profits) are going to head down the drain even faster.

What will the actual results be?

At the moment there will be a very limited amount of licenses given out but hopefully it would spread fast. Meaning you won’t notice much of a difference at first in terms of convenience.

They say stores will stock both craft and major beer companies but as anyone who has been to grocery stores around the world that sell beer, chances are it’ll mostly be the ‘big three’ with a couple slots available for Mill st and Steam Whistle. Hopefully I’m proven wrong but I’m a bit pessimistic about these things.

In the end it is certainly a step in the right direction.