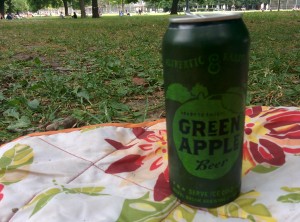 One of my favourite aspects of going to Trinity Bellwoods is the fact that it’s one of the few places in the city you can have a beer without causing too much fuss.

It’s a large beautiful park that is just MADE for picnics and having a beer or some wine with some bread and cheese and heaven there.

These were the circumstances around my first taste of Green Apple Pilsner by Nickel Brook.

Shortly after sampling the beer we were trapped under a tree with hail pounding around us and lots of lightning but I have a feeling the beer wasn’t involved in those circumstances.

As a note, you should always drink beer out of a glass. I did not though. Do as I say, not as I do. You’ll see why in the review.

Appearance: Unknown. It’s a can and I’m at a park. Poured some in my mouth Shawna said it looked golden and filtered.
Aroma: In a can, this review sucks. Strong sour apples.
Taste: The apples take over and can’t really pick up much else. A bit of pilsner malts.
Aftertaste: None.
Overall: Light and refreshing.