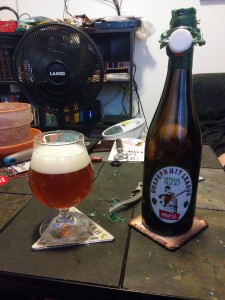 We almost lost a finger or two trying to get into the latest seasonal release by Mill St, Grapefruit League IPA. The attractive 750 ml bottle with swing top opening is coated in a really tough to open wax seal, and we missed half a hockey period getting this sucker open. I guess it had time to warm up the bottle slightly to bring it to proper 8 degree serving temperature, so all was not lost. (Plus I really like making Kole work hard for his beer.)

We were excited for the potential citrusy notes in this special seasonal release to celebrate the opening of the Blue Jay’s season in their spring training Florida “Grapefruit League”. Weighing in at a hefty 7% ABV, this is not a beer to be taken lightly. It also makes quite the dent in the wallet, at $9.45 per 750 ml bottle at select LCBOs. This brew is actually made in their Ottawa outpost. Devoid of an MLB team, we can get behind Ottawa cheering for the Jays, especially if beer is involved. 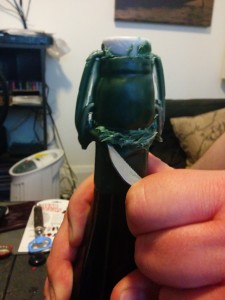 ad.
Aroma: Strong grapefruit hops aroma as expected, plenty of citrus. Undertones of the malt backbone, biscuit aromas. A good aroma for an IPA since you can smell more than just the hops.
Taste: Juicy grapefruit flavouring from the Cascade hops. Roasted malt backbone with a slight pizza dough flavour. Wax. Oh my god there is so much wax in my glass!! Little bits of floating green wax. I want to blame Kole, but the guy laboured over the bottle for 20 minutes to get it open.
Aftertaste: Short aftertaste of citrus rind. Was expecting a longer finish for such a strong beer.
Overall: Pair with spicy foods for contrast and to cut the heat, maybe some suicide hot wings? Really delicious, and if the price point was lower, this would be one very dangerous beer to have around in the summer. Get rid of the wax coating guys – it’s a bitch to open.