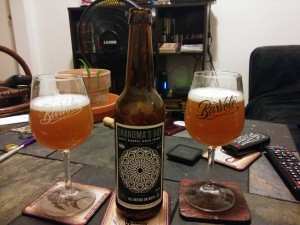 I have been told they are one of the best brewpubs in Toronto.

With how many brewpubs I have been to I don’t think I can bestow such an honour on any single brewpub.

I can certainly say they are right near the top though.

Head to Trinity Bellwoods park on any warm weekend and you’ll see at least a couple of groups sharing a 4-pack from the place.

When Bellwoods Brewery decides to do something unique, you can be sure it’ll be incredible, or at the very least, be something you’ve never tasted before.

Grandma’s Boy is the second iteration of Bellwoods very first barrel aged beer. It’s a one-off that was created to be a ‘wiser and older’ version of the original.

The beer itself is called a ‘Tripel’ which is a Belgian style of beer. This beer was aged for a total of 20 months in barrels and then is bottle conditioned for 6 to 8 weeks before being sold.

If you somehow acquired a bottle of this, we would personally recommend cellaring it if possible. If you got two bottles, maybe try one in the cellar for a year and try one now so you can compare them. If you don’t have one I am sad to say you probably wont be able to get one, the beer is sold out and they can’t exactly recreate it.

Here are our notes:

Aroma: Sweet and sugary. It smells like plums but a bit harsh.

Taste: Orange and tangerine hit my pallet first. Then Plums. Sweet but with a kick of sour at the back of the tongue. Alcohol bite but in a good way.

Overall: A lovely beer (even if Shawna may not have been the biggest fan) and something I will sorely miss.