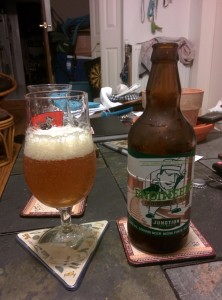 We live on St Clair West. Being so close to the Junction we find we are always talking about Indie Ale House and other awesome booze places in the neighborhood.

This may have had a negative effect on Junction Craft Brewing as we live so close to them that we always just assume we are talking about them. It seems this is untrue as so far we haven’t really said much about them at all!

We picked up a bottle of their Engineer’s IPA. Which (according to them) is a complex and bold IPA. While other offerings by them come in cans, this comes in a brown bottle.

After pouring the beer we had to deal with a wasp emergency. Once the wasp was dealt with the beer still had head, which is quite impressive.

It looks like the Engineer’s IPA is no longer available at LCBO’s but I have a feeling it’ll be showing up there again. It sits at 6.2% ABV.

Appearance: Unfiltered copper ale with a white head that lasts.
Aroma: Light biscuit and pizza dough malt backbone with a bit of tropical fruit like mango.
Taste: More of that tropical fruit. Some berries and mango. The malt is there but much lighter in taste. Not too bitter. Bit of honey near the end.
Aftertaste: Tropical bitterness.
Overall: A nice complex IPA.