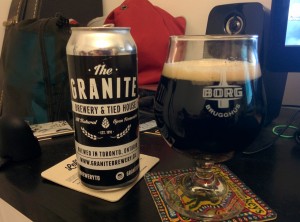 I’ve always been a fan of the Granite. They have consistantly offered great beers for the decades they have ben around.

It’s possible you haven’t heard of them as they are generally understated. They don’t do beers that will rip your face off or melt your teeth, instead they try to do simple styles REALLY well.

Hell, their most well known beer is a simple dry hopped ale.

Darkside is a black IPA. Generally the style is a little more malt forward than a standard IPA and uses roasted malts which should add some espresso or chocolate notes to it. It looks like this style will be added to the BJCP guidelines in the next year which is exciting. It is a tad ironic that in IPA the P stands for Pale, a black IPA can’t actually be pale.

This beer can only be purchased from the Granite directly and is available on tap or in cans. It sits at 6.75% ABV.

Appearance: Black as the name implies. Thin head that doesn’t stay long.
Aroma: Roasted malts first. Espresso and earthiness. Cherry comes in a bit as well. Juicyfruit.
Taste: Espresso and dark chocolate bitterness that mingles with the hops. Some flowery hints. The hops come mostly in the finish.
Aftertaste: The finish is rather long and bitter.
Overall: An interesting take on the IPA. It’s more malty than I would expect an IPA to be, but that’s kind of the Granite’s style.