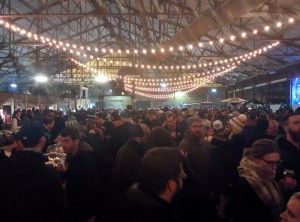 Time to get down to business and go over the pros and cons of Cask Days here in Toronto.

The event had a MASSIVE selection of beer to choose from. Everything from a standard cask ale to a spicy peanut butter stout (Of course from Sawdust City!) With 350 beers available, anyone that went would have tons they’ll enjoy no matter how picky they are.

They played the Jays game on a big screen!

The music and general atmosphere were awesome. The lighting was somewhat beautiful and everyone was having a great time.

There were a huge number of beers that would be impossible to taste via any other means here in Ontario. Not to mention all the one-offs that will never be made again.

There were two lineups that were just insane. The one to get in and the one for the bathroom. Both these eventually got solved but it put a big damper on our fun when it took over half an hour to get into a 4 hour event. The bathroom line was really annoying for the obvious reason.

The price was quite high. $2.50 for a 5 ounce sample is a bit over the top and $40 for a ticket was a bit much. The glass they gave us was nice though and real glass unlike the Toronto Festival of Beer which has switched to plastic.

At the end of the night they closed the bathroom area early (about 15 minutes before the event ended) and security started sending people to a far corner area. Turns out this far corner area was for employees only so a massive pile of people were basically told there was no washroom anywhere around (and Brickworks isn’t exactly near any obvious bathrooms other than trees.) This was a huge oversight in terms of communication.

In the end we had a great time but there were certainly a few kinks that needed working out.