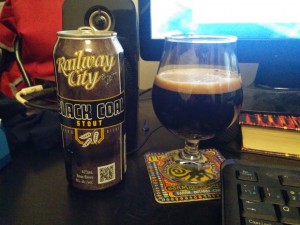 Shawna told me that I have to be the one to review this beer for one simple but very understandable reason: It has the same name as me!

I’m talking about the Black Coal Stout by Railway City.

A seasonal by Railway, this can is generally only available in the winter.

According to their website this brew has won both the 2012 silver and the 2013 fold medal for best brew at the Ontario Brewing Awards (which has some tough competition!)

Appearance: Pitch black as advertised. Thin brown head that fades fast.
Aroma: Classic stout smells. Vanilla and roasted nuts. Roasted and malted barley. Almost no hops.
Taste: Quite a thin mouth feel. Nicely carbonated. More of that vanilla and some coffee comes up on the back of the tongue. Slightly sweet, but not in a bad way. Chocolate shows up after a few sips.
Aftertaste: The malted barley stays with you, giving you a warm and toasted aftertaste.
Overall: A great stout and I’m proud to have my name attached to it.