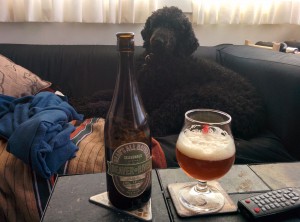 I picked up this bottle of beer having absolutely no idea what it was. Sure, I COULD have read the bottle and learned a bit, but all I saw was that it was something I hadn’t tried before and that it was made by Beaus.

After a little research it seems this is a little seasonal IPA that comes out every year. It has won several awards including gold at the Canadian Brewing Awards.

They say on the website that this beer is meant to blend both the British and American styles of IPA. The American generally being more hop forward and the British (I assume they are comparing to an ESB) being much more mellow and fruity.

Appearance: Reddish amber. Nice white head that stays pretty well. Filtered.
Aroma: Fruity and bitter. Tropical fruits like banana combined with grapefruit
Taste: The hops bite at first with a strong grapefruit bitterness but this is mellowed by a nice bready sweetness later in the sip. I can see the English influence with the malt sweet background, but the hardcore hops scream American style. The malt also brings up some nice caramel notes.
Aftertaste: Super bitter hops as expected.
Overall: I can see where they are going with the American and British mix but I would personally call this an American IPA with a malt backbone.