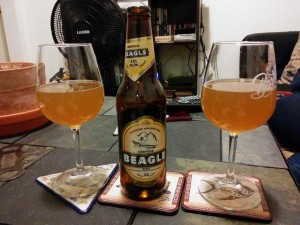 I work in the travel and tourism industry, which means my friends and colleagues are always returning from really nifty places. It also means we are forever loaning each other obscure pieces of winter gear or diving gear to help each other out, and that typically comes with a gift upon return. Most recently, a friend returned from trip with Quark Expeditions to Antarctica, and she had some Argentinian beers in tow for me. Score!

When I think of Argentinian booze, I think of wine. Argentina is the 5th largest wine producer in the world, and Malbec from Mendoza is a wonderful elixir. I don’t usually think of cerveza when I think of Latin America, and I definitely haven’t associated craft beer with Latin America before. Turns out they are catching up with the times. We sampled Beagle Fuegian Ale (Rubia). My Spanish isn’t hot but I wasn’t able to find a proper webpage for them, only a Facebook page and an inactive Twitter page. At 4.8%, this was a nice beverage to sample on a cold winter’s night. We split it between 2 white wine glasses, cause we’re fancy like that.

Ushuaia is essentially the end of the world. The southernmost city in the world, bordered by the Beagle Channel in the south, this is the capital of Tierra del Fuego. Snow covered mountains loom in the distance, and this city is best known as a launching point for many Antarctic expedition ships. There is a certain romanticism about travelling to Ushuaia, especially within the industry. It’s a final frontier of exploration. The friend who brought me the beer had her boyfriend, not a well-travelled fellow, fly all the way down to Ushuaia on his own to meet her for their trip. All the way to the end of the world.

This beer is fairly widely available within Ushuaia, but it is NOT available at the duty free in the airport. Take note! My friends had already checked their luggage and went through security when they discovered this, and hailed a taxi to take them back into town to pick up a case for me. I felt pretty special getting a box of beers from the end of the world.

Overall: Refreshing, better than I anticipated. I would definitely drink this if I find myself in Ushuaia at some point in my life.