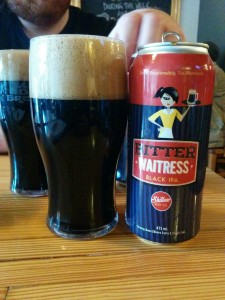 We made it through Chanukah! Full disclosure – Kole and I have been in China for the past 2 weeks and just got home last night. We probably won’t touch Chinese food again until Christmas Day, as tradition dictates.

We’ve been fans of Shillow Beer Company from the beginning. I really love that Jamie Shillow is the brewmaster and that she is a graduate of the Niagara College Teaching Brewery. They are currently a contract brewery, and Bitter Waitress Black IPA is their first LCBO listing, but you may have tried Sass on the Side at Beer Bistro, where Jamie worked for a very long time. We went to the launch party of Bitter Waitress Black IPA at Beer Bistro during Toronto Beer Week this fall, and we wish the Shillows all the best! And we thought it was fitting to finish our 8 Beers of Chanukah 2015 series with a brew made by someone with the Twitter handle of @kosherbrewer. L’Chaim, Jamie & Ben Shillow! A 473 ml can retails for $2.95 at the LCBO and weighs in at a very respectable 6.5%. We enjoyed ours at our local watering hole, Dave’s. We tipped well, following the can’s instructions.

Appearance: Dark black pour with a lasting tan head. Looks more like a stout in the way the head lasts.

Overall: This can was not super hoppy, but I remember the brew having a hoppier profile when we tried it on tap at Beer Bistro and earlier cans. We enjoyed it with nachos, and it was a great fit. The sweetness washed down the greasy cheese from the nachos and cleansed our palate. Serve with cheese. Lots and lots of cheese, with lots of varieties.