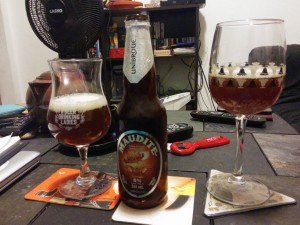 I first encountered La Maudite by Chambly’s favourite brewery, Unibroue, in 2004 around the time they were purchased by Sleeman. I don’t know if that first six-pack dated back to before the acquisition, but it was too refined for my 21-year old palate at the time. Someone left most of a six-pack in my fridge, and I didn’t quite know what to make of the rich flavours at the time. It is a fine example of a Belgian-style Dubbel, a bottle refermented bad boy. This one part of the Unibroue Sommelier Gift Pack, available for $13.95 at the LCBO. La Maudite is a heavy hitter, at 8% ABV in a 341 ml bottle. Unibroue helped me refine my palate during my time in Montreal, and the first beer festival Kole and I went to together years ago was in Chambly. I have a weakness for them.

Maudite is Quebecois slang for damn, as in “Damn, that is one fine beer.” I think it works well for getting through the family Chanukah party, when the parental units hone in on asking for grandchildren.

Overall: I got over the fear I had of this beer a long time ago. It’s now a staple order for me at Beer Bistro. Definitely a good option if you’ve been suckered into another Chanukah party with your cousin Mortimer.