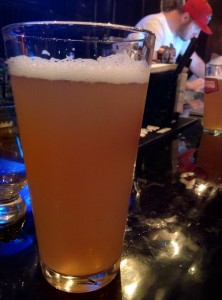 We were first introduced to Liberty Village Brewing a few months back at an event at The Only in the East end. I don’t remember much from that night but do know the guy there was incredibly friendly.

I had this beer at the Speakeasy bar just behind the Chill Ice House. It was served in a basic pint glass. This is a dry hopped American style pale ale so I expect it to be hoppy and filled with grapefruit.

At the moment it looks like they contract their brewing to Cool Brewing.

Appearance: unfiltered light orange. White head.
Aroma: Grapefruit. Like, hardcore Grapefruit. Should have some with brunch.
Taste: Much lighter than expected. Grapefruit and mint with some tropical fruits.
Aftertaste: slight bitterness and dry.
Overall: A great American pale ale. I enjoyed every sip. Will seek it out wherever I go.