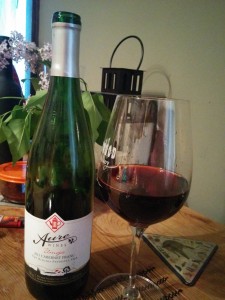 When I spot a good price on an LCBO Vintages wine, I snag one. This weekend I found a bottle of Umoja 2011 Cabernet Franc by Aure Wines from Beamsville, ON on sale at the LCBO, and I knew I had to grab one. I first tried Aure at the Wine & Spirits Festival in 2014, but I haven’t had a proper tasting since then.

A bottle of Umoja 2011 Cabernet Franc VQA wine typically retails for $14.75 at the LCBO or $19.95 directly from the vineyard for a 750 ml bottle. But the LCBO on Front St near the St. Lawrence Market was selling this vintage for $10.40 a bottle last week. How could I resist?

I’m a fan of single-varietal wines, as it really helps me narrow down what I like in general. Umoja is the Swahili word for unity, harmony or alliance, which sounds like it would be a good name for a blend. Aged one year in French oak, it was a moderately complex wine for a single varietal.

Appearance: Deep burgundy colour.
Aroma: Spicy notes, possibly cinnamon.
Taste: Dark cherry flavour, peppery notes. Semi-dry palate. Can definitely taste the complexity from the barrel.
Aftertaste: Soft, semi-sweet finish.
Overall: A nice dinner wine. We paired it with striploin steak and fiddleheads, and it was a nice compliment. At $10.40 a bottle, you could happily stock your wine rack. At $14.75 a bottle, it’s worth trying out. I wouldn’t pay the full $19.95 a bottle from the vineyard though, even if it is a vintage.