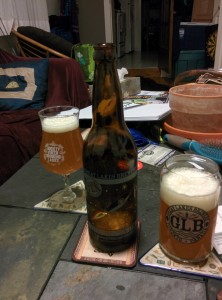 Is Great Lakes Brewery the king of the IPA? That seems to be the sentiment I keep hearing. If someone is compairing breweries here in Toronto it’s always mentioned that the best IPA’s come from the little brewery way the hell out in Etobicoke.

While I can’t confirm or deny that allegation (hell, taste is subjective as hell) I can certainly say the IPA’s I’ve had of theirs have been quite good. Karma Citra has become a beer I compare most IPA’s too.

Today I’m reviewing their new Thrust! an IPA. This beer is a seasonal that so far has already won gold at the Canadian Brewing Awards. To be honest we picked up this bottle mostly because of the awesome packaging. 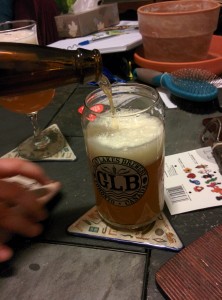 I actually tried this beer a little bit earlier in the year at the Spring Session of the Festival of Beer.

You can pick up Thrust! at most LCBO’s and it costs just $5.95. The beer comes in at 6.5% ABV.
Appearance: Unfiltered. Dark gold. Thick white head that stays.
Aroma: Hardcore pine. Grapefruit. Lychee. Peaches.
Taste: Very fruity. Tropical with lychee and peach at the front. Bitter grapefruit next. Shawna calls it a fruit salad.
Aftertaste: Light bitter hops.
Overall: A great strong IPA.