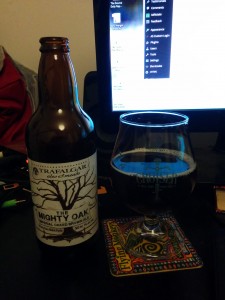 Lately we have been somewhat avoiding Trafalger Ales and Meads. It wasn’t a personal thing, we just hadn’t enjoyed the offerings of theirs that we had had.

Recently at the Ontario Brewing Awards they won a slew of awards including ‘Newcomer of the Year.’ Which is a bit strange seeing as they’ve been around since the 90’s, but whatever. We decided if they keep winning all these awards they must have SOME good offerings.

So I am taking another chance. I’m going to try some of their Mighty Oak. I choose this beer because it is imperial and it has been lightly oak aged and as I always say: almost anything that comes out of a barrel is delicious!

Appearance: Dark brown. Possibly filtered. Basically no head.
Aroma: Earthiness, hint of mushroom and damp dirt. Roasted coffee. Dark chocolate.
Taste: More of that chocolate and roasted coffee. Lighter than expected. The earthiness is less than the aroma but still there. Very little carbonation. Mild oak is there for sure.
Aftertaste: Long and bitter with plenty of hops to balance out the coffee.
Overall: Not a bad entry. It doesn’t stand up to some of my favourite imperials such as Long Dark Voyage but I can certainly enjoy this.