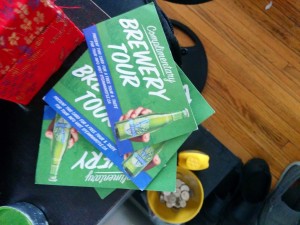 On the left there you can see the bounty of us going to far too many beer festivals. At almost every single one of them Steam Whistle is giving away these tour vouchers. We aren’t complaining though. With each tour comes free beer, so it’s a win.

I should start by saying both myself and Shawna have been on the tour numerous times before. Sometimes together, sometimes independently. Which is why these little piles of vouchers generally end up in the hands of our friends, particularly those from out of town.

A few days ago though, I decided to give one a try and give it a proper Boozehound walk through. The tour is a major tourist hotspot and some people might want to know what to expect before making the trek.

To my surprise the tour had been changed even since I had been there only a couple months ago. 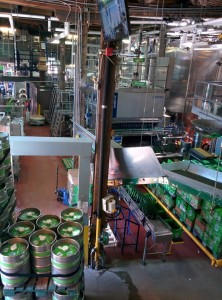 The first major change is that they use headsets now. Everyone on the tour puts in headphones and the tour guide wears a mic so we can all hear them without issue. This was a MAJOR improvement as in past tours I remember having a hard time hearing them.

The person who did this tour was quite new and it really showed. They were unaware of what a hops plan looked like an was unable to answer many questions we had. I can’t blame her too much as she was still pretty entertaining for a new person. And the information she did have she knew very well.

The tour consists of going through the general brewery and the process of how the beer is made, bottled and recycled. 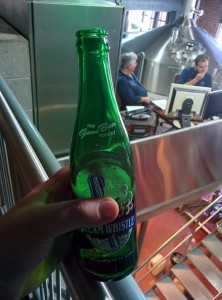 The information they give is pretty standardized but each tour guide usually has little tidbits from working for Steam Whistle that are entertaining to learn.

Probably the most fun part of the tour is pulling the actual steam whistle itself. It is incredibly loud and is always fun.

This post is starting to get a tad long so I will close in saying that it’s a worthy visit. Not to mention the $10 entry price generally gets you a glass or bottle opener as a souvenir which is fun.