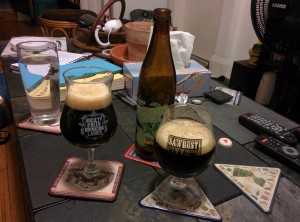 Bocks have got to be one of my all-time favourite beers available. While I’m generally an ale fanatic (especially if it has imperial anywhere in the name) the lager that can always make my mouth water is a bock.

The story goes that bocks were originally brewed for monks that would fast during the spring season. They would use the beer as sustenance, which is something I think we can all get behind.

I’m going to be honest here, I purchased my very first version of this because of the bad-ass goat on the label.

Amsterdam Brewery has been brewing their version of the Spring Bock for some time now and every year it gets plenty of praise. According to their website this brew has been winning gold and silver medals at various competitions since 2009!

We had a bottle split between two balloon style glasses.