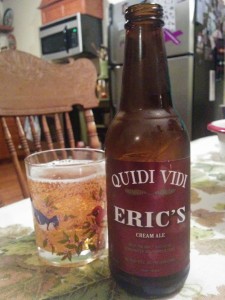 When word got out at work that I was heading to North West River, Labrador for a few days to visit a friend, the beer aficionados in the office steered me towards Quidi Vidi Brewery based out of St John’s, Newfoundland. Labrador boasts a population of 28,628 people and there are no breweries in Labrador, so a craft brewery from The Rock would work for me. 341 ml bottles come with a stubby neck in Newfoundland and Labrador that I found absolutely adorable.

We stocked up for the our long weekend with a $300 liquor store run on our first night, and replenished our stocks 2 days later with another $100 run. Woops. We made our way through most of the product lineup over the course of a few days. We picked up Eric’s Cream Ale on our second run, and after tucking into a dinner of smoked arctic char, we sat down to play cards and make our way through the boozy provisions.

I’m a big fan of the cream ale style. Cream ales are a top fermented ale that typically undergo a cold lagering process after the primary fermentation is completed – you may also know the style under the name Kölsch from Cologne, Germany. Sometimes they pour out rich and creamy, like McAuslan’s perfect Cream Ale. I find the style a good way to get to know a new brewery. I went for Eric’s Cream Ale, sitting at 5% ABV. A 6-pack retails for $15.09 and a 12-pack retails for $26.48 at Newfoundland and Labrador liquor stores. I did not find it true to style when I sat down to evaluate it, despite my earlier Tweet that it was. I prefer a cream ale to be rich and creamy, as opposed to a stronger flavoured lager.

Appearance: Golden colour with reddish overtones. The beer used to be known as Eric’s Red. Thin head that faded very fast. Evenly carbonated. Does not look like a cream ale.

Aroma: Mild hoppy aroma, mild malt aroma. The aroma is overall very gentle, and appealed to the widest range of tastes within our party.

Taste: Smooth flavour, tasted more like a lager than an ale. Similar to Beau’s staple brew Lug Tread in flavour.

Aftertaste: Clean aftertaste that did not linger.

Overall: A very clean and easy drinking brew. I’ve had most of the offerings from this brewery over the last few days and while they are solid, I’m not sure what the hoopla is regarding them. It was nice to try a product from Newfoundland and support the local brewing economy. I will actively seek them out if I’m ever back in Newfound and Labrador but I’m not smitten with the brewery.