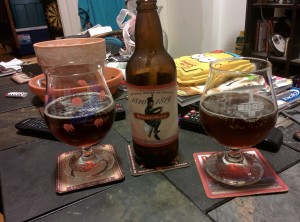 For those not in the know, Black Creek Village is a bit of a ‘pioneer village’ of sorts. You can go and see what life was like in Toronto’s early days. One of the coolest features of this village is the fully working brewery.

We highly recommend checking out the whole village as well as the brewery but sadly must admit that the beer in the bottle in the photo was not made there.

For the LCBO runs of beer Black Creek contracts beer production out to the folks at Trafalgar.

This beer is inspired by the original beer ration that used to be given to soldiers. The beer is made using grains grown here in Ontario which is nice.

It should be noted that chances are the beer the soldiers used to drink as part of their ration had little resemblance to the beer offered here, which is a simple brown ale.